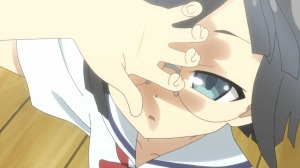 HOLY SHIT! WTF DID I JUST WATCH? This is going to be much different than Fate Kaleid Liner. Because this show gets dark pretty quick. 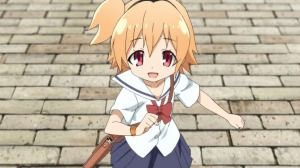 Akari Taiyou is a cheerful girl who spends her time fortune telling using tarot cards. Her mother was known for being an excellent fortune teller until she died, leaving Akari to stay with her cousin’s family. On her way home, she passes by a well-dressed lady who greets her before entering a car with another well-dressed lady. Life seems to go well for Akari, but her cousin, Fuyuna, is a different story. Despite being top of their class at school, Akari gets most of the attention with her tarot cards. 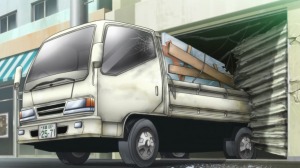 That night while Akari’s asleep, Fuyuna seems to be busy scribbling something in her notebook that cuts some of the plants in Akari’s room. The next day, a truck seems to fall down by accident, barely missing Akari and destroying a nearby store. Akari checks her fortune at where she works only to find that she now has bad luck. Also, a middle-aged man who’s just been widowed seems to be stalking the place, asking for ways to get his dead wife back. 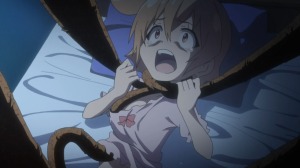 When she gets back home, the rest of the family are ready to visit Akari’s mothers grave. But while the rest seem fine, Fuyuna seems extremely depressed, not even bothering to speak with Akari. That night, Akari wakes up from a supposed nightmare only to see a plant monster proceed on strangling her. Just before she gives in, her tarot cards seem to move and she sees another version of herself stab what appears to be a dark tarot card. When she wakes up though, she finds Fuyuna in front of her brutally stabbed. 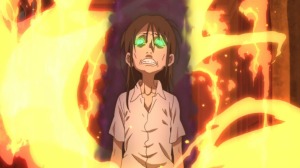 The next morning however, something peculiar seems to happen. We see them go to Akari’s mothers grave, but Fuyuna seems to be nowhere in sight. What’s more is that no one seems to think she exists. At night, the mansion Akari tells her fortunes at is on fire, and the middle aged man from before seems to be part of it. 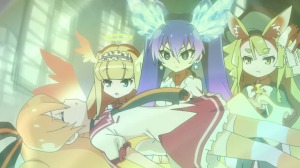 When Akari meets the man face to face, she suddenly ends up in a different dimension where the man is now replaced by a fire-breathing monster. Once again the tarot cards activate, but this time the monster is too hard to fight alone. When she falls unconscious though, 3 other tarot users come out of nowhere and destroy the flaming monster. They seem to know about what’s happening and carry Akari out of the fire. 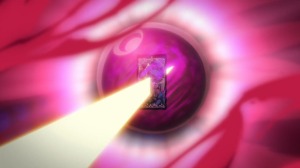 One thing I really like about this show so far is it’s use of foreshadowing. We see enough to still keep our interest(such as Fuyuna’s death), but we know there is still much to learn from here on. What we do know is that Tarot cards play a large part in everything. It seems that the Darker Tarot Cards possess those with negative emotions,transforming them into the aforementioned monsters and only leaving them once the tarot card is destroyed. But unlike most magical girl shows involving tarot cards where it’s simply purified, the host of the darker tarot card dies and has their existence erased. We don’t know much about Akari’s connections with the tarot cards, but they seem to play an important part as the other girls seem to stress out. 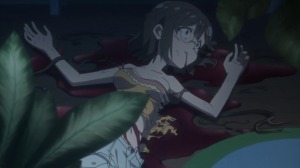 Visually, this show seems to be mostly well done. Character designs are quite generic, but the action scenes are well choreographed and fluid. The editing effects are used pretty well to build up a creepy atmosphere(static, blood cell expansion, etc). Music so far isn’t that memorable, but it’s well-composed and seems to fit fine with the tone of this show: hectic and creepy. 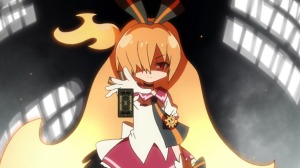 Overall, this first episode was quite a surprise. I knew from the trailers that this would be dark, but not quite this graphic. So far the pacing is spot on, keeping us in the dark until it thinks it’s time to show us something new. Everything is still shrowded in mystery, but I do like how the Tarot Card plays an essentail part in all of this. A dark version of Cardcaptor Sakura? Count me in.