Wow, this was actually painful to watch. Not because it’s bad, but because just the social awkwardness and humiliation in this one ep reached some uncomfortable levels of black humor. Be forewarned that this is NOT for everyone. If you want to look into the mind of someone who can’t even bring herself to talk to the cashier at mcdonalds, then prepare to join in the depressing and ironically hilarious events of Watashi ga Motenai no wa Dou Kangaete mo Omaera ga Warui!

Kuroki Tomoko is a 15 year old high school girl who has been a shut-in since middle school. While she has spent approximately 50 years of dating in the world of Otome games, she is highly anti-social and her looks in real life are enough to make her puke after looking in a mirror(sheesh, talk about lacking self-confidence). She spends most of her times badmouthing those with friends(in her head) and staying at home playing games. However, she is determined to change, doing whatever it takes to make friends and possibly get a soul mate.

What makes watching this so painful is solely based on the main character, Kuroki. Despite her calling those around her inferior, she suffers a common dilemma: difficulty to make friends. Even with all the exaggerated and over-the-top antics she pulls in attempting to be popular, the undertone is closer to reality than we think it is. When she threatens to commit suicide if her brother doesn’t talk to her, it’s intended to be funny. But it’s not something we feel good about laughing at, because with how her social life is, we wouldn’t be surprised if she did plan on hanging herself.

As for her attempts at being popular, they go back and forth. From trying to talk with her brother to ordering a hamburger and pulling off Death Note style mouse swipes when researching fashion styles, Kuroki’s failed attempts are far from monotonous. In fact the fails are so epic and humiliating that even the smallest sign of communication comes off as both sad and triumphant. It’s a losing battle that we hope she’ll end victorious.

Animation is subdued for the most part, often removing several facial features from people and seperating lighting between several rectangles. This is a gag show though, so the low budget is appropriate and it does shine when it needs too. Music is nothing worth writing home about, but like the animation it’s perfectly fine for the kind of show it is. The OP deserves special mention though, as it perfectly illustrates the melancholy  and chaos inside the minds of the unpopular. 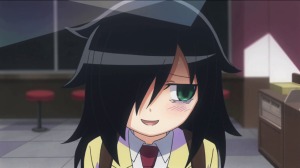 I can’t say that this show is recommendable, as its humor is morbid and some moments are downright tragic. Even without any drama, Watamote manages to find a way to keep you depressed. But I can’t say i’m not looking forward to more. This is less of a guilty pleasure, and more of a demented one. I feel sorry for Kuroki’s suffering, but I feel more sorry for enjoying it.

One thought on “Watamote First Impressions”