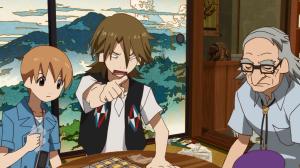 3 episodes in, and this show continues to just blow me away. It has the atmosphere of a studio ghibli film, the animation quality of…well PA Works, and a cast of characters that truly give off the feel of an “eccentric family”(translation of uchouten kazoku).

So every year, the Shimogamo’s appparently cruise on a flying ship during the gozan fire festival. The problem this year is that the usually responsible Yaichirou fails to prevent their ship from being destroyed mid-delivery. With nowhere else to turn to, Yasaburou is put in charge of finding a replacement cruiser. The only one he knows that has another cruiser is the old tengu Akadama. That proves useless though, since he gave it to Benten out of his hopeless crush(it runs on booze). And so he reluctantly must meet Ms tanuki stew maker once again.

But really, that all serves as a set-up for more background info and the characters and world it’s building. We learn that before this time, there was a power struggle between the tengu and tanuki, and that the one time the tanukis won was when Daddy Shimogamo transformed into an entire mountain. The family feud with the Ebusugawa’s was happening long before, and apparently Yasaburou was temporarily engaged to the Ebusugawa’s daughter Kaisei. Calling off the engagement after their father’s death might have actually worsened the feud. 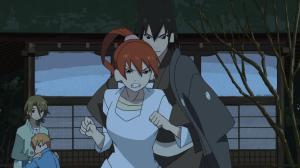 What I really like about all of this though is that even if these family feuds and ancient conflicts sound fantastical, the core of it all still remains calm and close to human relations. In this episode alone, we see flying boats, underwater clocktowers and transforming trees. And yet the dialogue stays natural and the characters aren’t really over-the-top. Everyone has quirks, but the issues and joys everyone has aren’t that far from what humans would feel. Other than the flying ships, the tanukis and tengu enjoy a good festival gathering as much as anyone else. 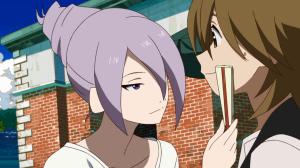 Of course the main attraction is once again the relationship between Benten and Yasaburou. We all know by now that Benten is not someone tanukis should trifle with. She’s got as much power as a tengu, can cause thunderstorms with just a fan wave, and constantly reminds us that she can  grab one of these tanukis and stew them in a couple hours. What’s really interesting though is just how playful she is around him. 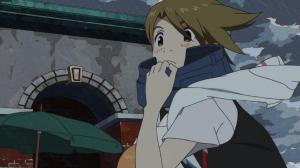 We can guess about Yasaburou’s guts to talk with such a threat, but when she easily agrees to lend him the flying room she has and goes skinny dipping in front of him to grab hold of a whale’s tail for fun, it seems there might be something more romantic involved. When she says “I can just eat you up”, it seems both lethal and slightly flirtatious. And when she grabs that whale tail, it’s just as awe-inspiring as it is to Yasaburou.

From what I can tell, this is clearly going to be character-driven(NOT plot-driven). So if you’re looking for a fantasy epic, there’s nothing to look at here. But it’s turning out to be one of the best slice-of-life out there.