Servant x Service why must you bring hope of a potential romance in  my heart?

In this episode of SxS, Hasabe’s interest in Lucy is showcased in the spotlight. At first, I thought it was just harmless flirting, but now he is actually showing some SERIOUS interest in her. And from how I see it, it seems as if he himself doesn’t realize it at all.

The fact that Hasabe asked Lucy out while he was helping her out in the library was really out-of-the-blue. As expected, Lucy turned him down. It doesn’t really seem right that he would be straight forward and just ask her out, so of course she would be insecure and unsure. I understand that she is afraid of being judged and criticized due to her past, but just like Hasabe said, she IS  a grown woman after all. She should learn to grow past all that. 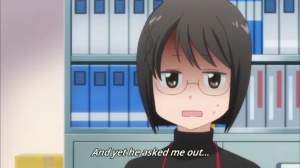 I can totally relate to Lucy when it comes to over-thinking things. I bet at some point, girls (Not in a general sense) have come across feelings of being unsure and insecure especially when a gorgeous guy would ask them out. I wouldn’t blame Lucy for questioning whether or not she should take her date with Hasabe seriously.

I started feeling as if Hasabe is SERIOUS when it comes to dating Lucy because 1) He told Chihaya that he has NEVER asked any girl out before (Even if he collected a couple of girls emails) and 2) Lucy seems to catch his eye more than any of the other girls in his department. He is not bothering Chihaya or Saya nor does he offer to help them out as much as he does with Lucy. 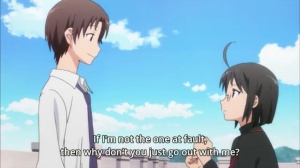 Hasabe may seem like the careless, carefree, I-do-what-I-want type of guy on the outside. But I bet that when he asked Lucy out for the second time, he felt disappointed when Lucy shot him down once again. I really felt his hidden emotions revolving around disappointment behind his carefree smile. And since he’s great at like EVERYTHING he does, he was able to hide it from Lucy very well. 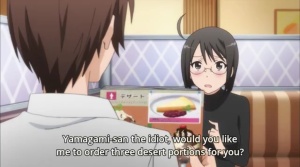 I also think that Lucy may be interested in Hasabe as well. Why else would she accompany him to dinner often? She also fails to keep her distance from Hasabe even after the embarrassing confession.

In addition, the fact that he offered to walk her home after that night of drinking with the coworkers and the newly introduced Section Chief shows that he actually DOES care for her. What I couldn’t believe was that he also brought her to a hotel to spend the night where Lucy wakes up the next morning with him sleeping beside her! What could have happened between them? MY MIND WAS UNRAVELING WITH THE POSSIBILITIES!

I also thought it was hilarious when Chihaya showed some feelings of jealousy regarding the chance of a budding romance between Hasabe and Lucy. Chihaya’s main concern is making sure that Lucy someday grows interested into doing cosplay. Like Hasabe, I also feel that Chihaya MIGHT also be interested in Lucy as well. Especially since she referred to Hasabe as “Competition” or her “rival”. 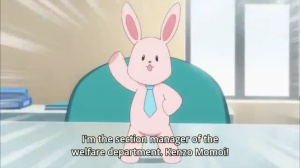 I thought  that there wouldn’t be any more character introductions by now. But, we are introduced to their department’s Section Manager, Momoi Kenzou who turns out to be a talking stuffed pink bunny. How is he able to talk and move? I have no idea. His character is really out of place yet fantastically bizarre for this series especially since it is supposed to somewhat reflect the realities of the every day life at an office based workplace. I know that he is pretty fun and adorable, but HOW CAN WE TAKE HIM SERIOUSLY? AND HOW DOES HE WALK AND TALK?

I really liked this episode as a whole. The Section Manager didn’t dwindle the show towards a negative direction at all.  And the fact that Hasabe and Lucy are complete noobs when it comes to dating and relationships gives me feelings of excitement, hope, and anticipation for a chance of romance to actually happen between the both of them in the following episodes. WHAT REALLY HAPPENED BETWEEN THEM AT THE HOTEL? WILL WE EVER FIND OUT.

MAN, I JUST WANT THEM TO DATE.

About Flow with Kelsey Mhyn

A simplistic minimalist who doesn't bound herself to labels and believes life should be taken one day at a time with utmost consciousness and awareness.
View all posts by Flow with Kelsey Mhyn →