Well the most exciting part of this series seems to have gone past, and it’s now time to once again focus on Misaka’s friends and their daily life. And surprisingly, that doesn’t ruin the experience. 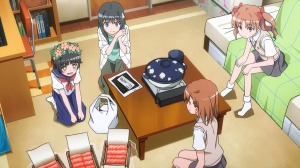 So we start off with Misaka trying to get permission to leave for a study group outside, despite weeks of fake abscences due to the Sisters arc. Obviously she can’t get away from this without lying, but the dorm supervisor is surprisingly lenient this time. From there we go to everyone getting hot pot ingredients, Misaka meeting up with ITEM, and a sigh of relief from Saten, Uiharu and Kuroko that Misaka is okay. 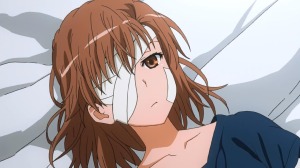 What I like about all of this is that it doesn’t go straight into goofiness right after a serious arc. It recognizes that Misaka’s absence has affected the others in some way, and it’s nice to finally have her back in their lives. Rather than a plunge into sweet territory, it works as a sigh of relief from all the drama in the past arc. 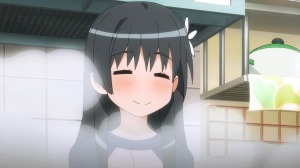 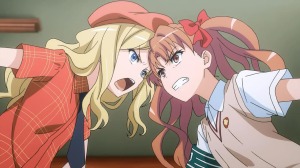 On top of that, the comedy is not so bad either. Yes they’re a bit fanservicy, such as when Frenda and Kuroki harass their onee-samas, Mugino and Misaka. And yes, Kuroki’s attempts at seducing Misaka are a bit repetitive. But for the most part, they don’t go overboard with it. And if anything, seeing Saten trolling Misaka with her hidden relationship is always fun.

Next week is the 30 minute preview to the Index movie, so no Railgun post next week. But overall, I think Railgun S is doing alright, even if it seems to have passed its climax.