This show just gets weirder by each ep. This has turned into what could possibly be a deconstruction of the entire super sentai genre, and whether that’s a good thing is still up for questioning. However, it does still keep things interesting. 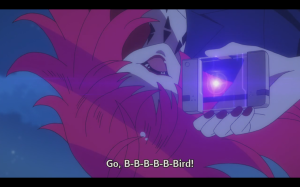 So it turns out that the weird eyeballs from ep 3 are part of Rui’s power as a Gatchaman. He has the ability to materialize the souls of the select 100 GALAX users as physical beings, which he can then use to take charge of hard labor (like maintaining a cable car) while also calling for help. Meanwhile, we see the shape-shifter fight Joe in his Gatchaman form before taking his own NOTE and fighting back. It supposedly escapes, with it’s last words being that the world would tear itself apart.

And with those come both answers and mysteries. We know that Rui has the power of a Gatchaman, but it turns out the Shapeshifter is the one who gave him that power. It’s a similar being to JJ, but it seeks chaos instead of world peace. According to Pai Pai, it has destroyed countless planets in the past, and remains one of the Gatchaman’s most dangerous enemies. But what really strikes my interest is his relationship to Rui. 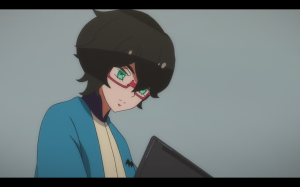 Rui is obviously horrified by the actions of the shapeshifter, like when he sees it morph into a frustrated mother that pulls off a grand theft auto, running over pedestrians at full speed right in front of her daughter. Nevertheless, Rui is still determined to use GALAX for improving society even if it’s possible to use it for world domination, especially when people seem to trust it more than the government. 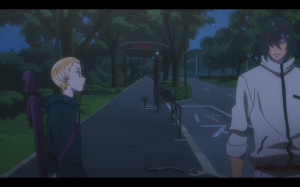 On top of that, Pai Pai refuses to let any of the Gatchaman pursue the shapeshifter for unknown reasons. What we do know is that it has deep connections to the past of Pai Pai and O.D.(first time we see O.D. acting serious). But that lack of activity does elaborate some of the Gatchaman’s lives and relationships. Joe works as a civil servant and was the one that got Sugane to become a Gatchaman. Utsutsu can apparently clone herself and redirect the energy of what she touches, but Hajime thinks that it’s cool.

I think the main thing about Gatchaman CROWDS is that it’s creative, but lacking in direction. It’s broken down tropes of the super sentai genre with moral ambiguity, conspiracy theories and a lack of fights scenes. But what it’s created is so convoluted that I don’t even know what to classify it. Is it mystery? Is it slice-of-life? Is it sci-fi? Or a mix between it all?