Remember when I said i didn’t care about the devil fallen-angel and angel war last time? Well scrap that, because shit just got REAL! You know when you call Satan as your back-up that you need to pay attention(SPOILER: HE DOES NOT APPEAR HERE).

So while Sona and her underlings protect the school, Rias and the rest face off against Kokabiel. But even with their sacred gear, none of it so much as scratches him. Even worse happens when Balba fuses the 4 excaliburs he gathered into one ultimate sword. Balba also reveals the true fate of those that took part in the Holy Sword Experiment.

To be perfectly blunt, a lot of twists and turns are quite predictable in a shonen-esque environment. Random power-ups, overpowered villains, and themes of friendship are all over this ep. Does that make it bad? Not really, as the cheesy atmosphere is one of the things that made Highschool DxD so charming. Xenovia pulling out a broad sword(durandal) that immediately smashes the 4-sword Excalibur or Kokabiel being able to take away both Rias and Akeno’s attacks seem much more entertaining than guessing which boob we’ll get to see groped next (though that’s not bad either). 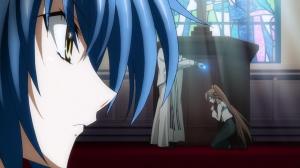 If there was anything to focus on, it would probably be Kiba’s revelation about the true fate of the Holy Sword Experiment. Supposedly what happened is that rather than matching the compatibility between the children and the swords, they decided to harness their spiritual energy as raw power so that they can create the combining of the Excaliburs, while also being inserted in possible Holy Sword Wielders(Xenovia didn’t require one; she’s a natural). In short, there was no neccessary reason for all of them to die, and despite Balba being considered a heretic, the Church continues to use his research.

Nevertheless, when Kiba gets his hand on just a small scrap of that energy, he sees the manifestations of all his dead friends. Through all of this, he realizes that all of them died not so that Kiba could avenge them, but so he can live on for their sake. No longer clouded by revenge, he manages to fuse both the powers of holy and demonic swords, defeating both Freed and Balba with the help of Xenovia. 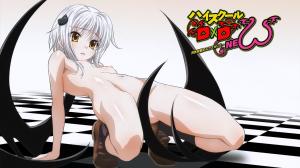 The battle will continue now that Kokabiel is fighting Rias and Issei, but for now we can be glad that Kiba no longer has to get all angsty next week. And also…HOLY SHIT THAT EYECATCH!