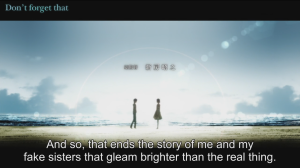 As expected, ep 16 is a recap of ep 13-15 of Bakemonogatari and the entirety of Nisemonogatari. Now that we’ve recapped everything other than this season, my guess is that we’ll never see them again. While the recaps were pleasant reminders of past series, all they really do is take up space in the ep count. What isn’t pleasant is the lack of a conclusion for Nadeko’s arc, but it’s definitely headed into a less trivial story than the previous arcs. NO ONE IS SAFE!

If there was anything this and the past 4 eps proved, it’s that Nadeko is BATSHIT CRAZY! All the girls in the Monogatari series were a bit funny in the head, but none of them reached the malevolence of Nadeko in her most revealing state. The white snake god was merely a delusion she created(triggered by Ougi’s conversation) as an excuse to justify her mental breakdown and jealousy towards Araragi. What’s left is an obsessive, egotistical child willing to kill anyone, even Araragi, to maintain her unrequitable love for him.

This is also one of the few times where Shinobu is not the solution to everyone’s problems. Everything she’s said about Nadeko is true, and taking action was definitely in the right step forward. But Nadeko’s sense of ego and delusion is enough to create the snake god entity inside her, and Shinobu can’t possibly match that power in the form she’s in. This was a ticking bomb that was at the brink of explosion, so trying to defuse it at this point was useless.

Any hope left lies in the hands of Senjougahara Hitagi, who quickly redeemed her lack of presence in this season. While Nadeko repeatedly stabs the corpse of Araragi and Shinobu, Hitagi interrupts their execution by calling her. Nadeko makes it clear that she is not bargaining for any deals on their lives, but it’s Hitagi’s side of the conversation that really steals the scene. She goes from self-sacrifice to time extension to order of killing, all while maintaining that calm tone that highlights her words even more. Let’s not forget that even when threatened, she still finds the chance to state how she hates cute brats like her. 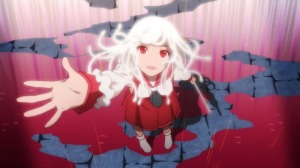 I’m left at quite the quandary in the Nadeko Medusa arc. On one hand it’s made me absolutely terrified of Kana Hanazawa and provided the best arc in the Monogatari series in a while. However, that cliffhanger and recap leaves me with a sour taste. Plus alot of the plot points are really confusing, particularly with Ougi’s involvement and figuring out what parts of Nadeko’s story is a delusion. Oh well, time to do some detective work unless we get some answers next time.