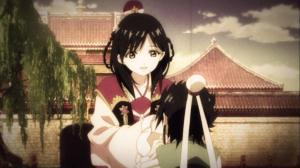 Mothers and kisses go hand in hand with murder and betrayal. At least, that’s what happens in Magi.

First off, let me just start off by saying Aum Madaura is both shamelessly manipulative and pathetic as a villain. Her only power is her Holy Fan which fools children into thinking she’s their mother. If she did this out of semi-pedophillic love or other psychotic reasons, this could be somewhat compelling. But in the end, her goal is another “World Domination” plan(this time through controlling all children) that she even ditches in favor of stolen treasure once her hideout is attacked. It’s definitely a despicable technique to manipulate maternal bonds, but her technique overshadows her role as a villain.

And unfortunately, the cheap shots by Madaura also translate to cheap shots at drama. Alladin has barely knows his parents, so he escapes Maudara’s grasp. But it takes a while for Alibaba and Morgiana to break free, and it’s solved through Aladdin using the “friends are your family too” plot device. Not only that, but much of their dilemma is just remembering a backstory we’re already aware of from the first season.

There is one exception to this complaint; Hakuryuu. During the 1st season, we only got to see him during the last 8 ep, so there’s alot of backstory to explore when it comes to him. Digging deep into the memories of his mother reveals the trust and betrayal happening in the Kou empire in the same order as his memories. He goes from fighting Alibaba over the loss of happy mommy times, to executing Madaura in front of her surrogate kids after showing how his mother betrayed the Kou lineage and joined Al Thamen.

In fact the majority of great moments is what happens AFTER the arc is over. From Alibaba taking in Madaura’s children after her death to Hakuryuu’s decisions to start his own war, each of their inner selves shine in these moments. Oh, and Hakuryuu kisses Morgiana. Yes, Hakuryuu proposes to Morgiana before he leaves, and Morgiana tearfully rejects despite being incredibly happy about her first “I love you”. Clearly this shows the force is still strong in “Morgiana x Alibaba”. 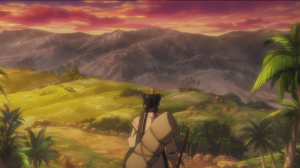 This arc has proven to work both as an excuse for bringing shonen battles and building up the events to come. Alot of it is a mixed bag, with some bits being shocking and others being predictable. Neverthelss, it was at least an interesting diversion that made a point on how easy little kids can be manipulated through false mothers. Won’t work on me, since half the time I spend with my mother is arguing. Till next time.