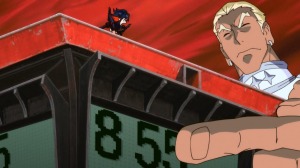 HE SAID WAIT TILL 1, SO WAIT RYUUKO

In Kill la Kill, there’s no such thing as no. You get exactly what you want: a weekly battle with dark comedy sprinkled in, and an excuseable story on the side.

Something i’m really glad about this ep (and Kill la Kill in general) is that they keep the focus on the fights. They’re the main solution to every issue and any important moment for the characters/story is linked to them. This constant cycle of violence is what keeps this entertaining, and it never slows down for the sake of exposition and build-up.

At the same time, they don’t neglect on expanding on other details. Gamagoori is revealed to have fought back against Satsuki’s ruthless style of destroying individual worlds to form a unified one, and ultimately sets himself as an example for endurance and obediance. Heck, his whole fight with Ryuuko is a straightforward metaphor for molding others in the image they desire. Even till the end his determination to follow rules and honor causes him to nearly kill himself.

And through all of this, the tone remains consistently crazy. We still got time to have Mako’s family goof off with robbing an empty television, Aikuro freezing Mako via acupuncture, and the dialogue during the fights are as much character-driven as they are sexual. And even if i mention this fight being a metaphor, the literal portrayal of whipping Ryuuko’s ass and forming a giant student mold is just bizarre. And the key to ending this fight is even more ridiculous. 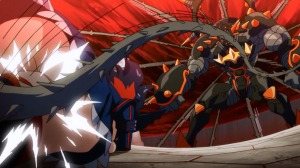 When your opponent doesn’t attack, you SLAP DAT ASS

What more can be said? I got exactly what I expected and came out completely satisfied with getting just that. Now it’s time to face the remaining devas, with 2 of them still missing a backstory. I expect answers when neccessary, but i’m pretty sure the fights will be the highlight for this month.