So after a lackluster end to the sword angel arc, I decided to take a break before returning to this show. Once I returned, I see Charlotte try to kill the headmaster. NOW it’s getting interesting.

That clone of Charlotte we saw last time was not a clone, but her twin sister Henri. Makes sense considering how prone she is to considering Raishin a rapist, but she’s also blackmail for Charlotte to take down the headmaster. After Felix’s humiliation in ep 4, his cousin Cedric decides to seek revenge for the Kingsfort family. As part of his sadistic enjoyment, he decides the best way to do this is force Charlotte’s family into criminal status by working as their assassin, leaving the Kingsfort family ready to regain influence. It doesn’t help that Henri has tried to commit suicide 6 times before Charlotte got involved, and it’s up to Raishin to make sure both get out alive.

Something I liked about this arc is that it gets straight to the point.We’re introduced to the villains right away, the conflict has noticeable stakes, and action remains constant. More notably, it feels relevant to previous events rather than tacked on for a higher episode count. Charlotte’s predicament is directly linked to her family downfall and Raishin’s actions against Felix. Her twin sister represents all that Charlotte has left, and we get enough screentime to sympathize with both of them.

But while I like the relevancy of this particular arc, it’s pretty clear that this is another case of Raishin being sidetracked. We get reminders throughout the entire series that his initial goal was to seek revenge against his brother Magnus while leaving his mark on the Evening Party. Heck, it’s more obvious now that one of Magnus’ banned dolls is revealed to be their sister Hotaru. Yet Raishin’s tournament matches are consistently left empty, and chances to confront his brother are interrupted by attacks from Cedric’s all-powerful butler. My point is that it’s now just an excuse to drag Raishin from one problem to another. 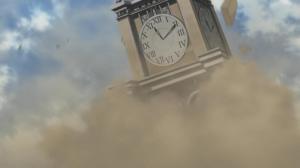 As of now, I can safely say that this show has lost any resemblance to a tournament show. It’s become too wrapped up in its side plots to really keep focus on the revenge plotline it set up. So  I hope for this side story to at least feel somewhat neccessary, and stay exciting till the end.