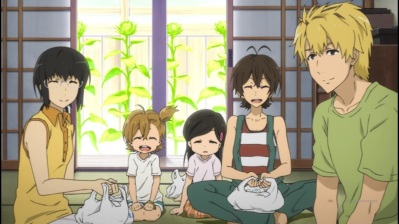 After episode one of Barakamon defied my low expectations for it, I was really excited for the show’s upcoming episodes. I wanted so badly to see where the story of Seishu and Naru would go, and whether or not it would stay the small, quaint, and charming show it seemed to be, or grow and expand into something even more heartwarming. Well, it turns out that the show is staying exactly the same as it was in the first episode; but that’s not a bad thing considering these past few episodes have been extremely funny and cute.

Now I’d like to start off by saying that this show has an episodic format of sorts. It usually begins with Seishu or a member on the island having a problem, but it getting solved by a thing an islander says, or Seishu himself. It’s a little repetitive in that sense, but that’s only the basic structure of each episode. Otherwise each episode is creative in changing up the situation, introducing new characters, and so on. Not to mention sometimes the best scenes in these episodes just come from hilarious comedic moments!

Episode 3’s first half is especially funny, since we got to see character development for one of the new side characters introduced, Tamako Arai. Now on the surface she just seems like a normal girl with glasses, but in this episode we learn she’s an aspiring manga artist; which of course led to a lot of hilarious manga and anime jokes. My favorite moment is when she worries she accidently lent Seishu her secret yaoi manga, and runs over to his house only to find Seishu and Hiroshi (Another new character) in what is a seemingly romantic embrace. It’s the perfect pay off for the joke, and all of these episodes are peppered with fun stuff like that.

Another thing I like about these episodes is that they provide both equal development for Seishu, and many of the new side characters. A prime example of this is in episode 2 when Hiroshi is in a slump because he’s doing poorly in school, and he doesn’t understand why. However when he sees Seishu’s dedication to his calligraphy, Hiroshi realizes that the reason his grades are suffering is because of his lack of motivation for school work. This leads him to make the decision that he’ll study hard for his upcoming exams.

I thought this was a really nice subplot, because it shows that not only are the residents of Goto Island changing Seishu, but he too is helping the residents grow and develop. It’s nice to see that this kind of character development can go both ways, and it made for a lot of heartwarming moments.

The only main problem I really have with these past few episodes is the same one I had with the first one: It’s kind of cheesy and simple. Despite my enjoyment, I will have to conceit that the inner monologues the characters say when they learn something are rather corny. They’re not necessarily bad by any means, but the often come across like a moral in a Saturday morning cartoon. Barakamon also doesn’t really go beyond its episodic character development and cute comedy. While this isn’t necessarily a bad thing, it doesn’t make it a ground breaking show by any means.

In the end though, I’m still very fond of Barakamon. It’s nice to see a show that offers hilarious comedy, and heartwarming character development in one whole package. Each week a character grows in some significant way, and it really makes the experience of watching Barakamon very rewarding. All in all, while it can be a little cheesy at times, this show is still worth a watch.