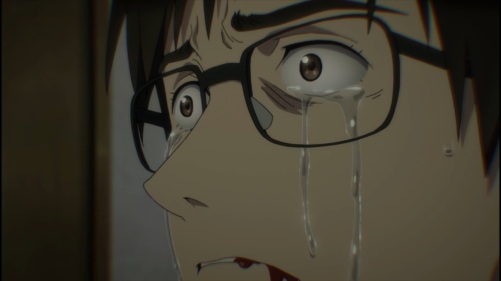 Yikes, it’s been a while hasn’t it! Yeah, sorry I haven’t been very consistent with this series lately, real life happened, and as we all know, real life is a jerk. Anyways, with that small disclaimer being said, how have the past 5 episodes of Kiseijuu been? Well, if I had to be frank, they’ve been pretty dang good! Kiseijuu is still going very strong, with the show’s interesting themes of humanity and survival instinct being pushed to the forefront in these most recent episodes. The characters are intriguing, the plot salivating, and the animation as consistently Madhouse as ever. And with this other disclaimer said, on with the post!

Now the main reason Kiseijuu has been so great throughout these past few episodes has been because of one thing, and one thing only, Shinichi’s character development. You see in episode 6 Shinichi learns that his Mother was taken over by a parasyte on her vacation with his Father, and now that’s she’s home she proceeds kills him. Shinichi in shock can’t do anything, but luckily Migi takes a huge risk and fuses with his heart, causing tiny pieces of himself to flow throughout his body, for better and for worse.

This newest development in the plot works so well because it effectively develops Shinichi into a completely different person, and helps bring the show’s central message into the spotlight. Shinichi is no longer completely human, Migi has taken over his bodily functions, and this has caused him to become stronger than all other humans. He can hear things from long distances, his eyesight has improved so much that he doesn’t need glasses anymore, and he’s now strong enough to fight parasytes without Migi’s help.

That isn’t the only thing that’s changed about him though, mentally speaking he’s less emotional and thinks much more like an animal. When he finds a dead puppy, he doesn’t bury it like he would have in the past, instead his animal instincts kick in and  his mind tells him to put it in the trash. This has lead to him alienating his best friend Murano, who can’t even see the old Shinichi anymore, questioning if he’s even the same person. Shinichi has become conflicted because of this, and while Migi tells him he’s a better creature because of his change in personality, Shinichi only wants to be human.

The tragedy doesn’t end there though, as after Shinichi’s regeneration he must deal with avenging his Mother. He feels guilty for letting his Mom and Dad go on the trip that destroyed them, and as his Dad lies in the hospital he seeks out his revenge. After defeating his monster Mother however, he effectively loses almost all of his humanity. He lost his Mother, his human heart and arm, and despite this he can’t even shed a single tear due to the effects of Migi’s new implementation in his body. It’s truly heartbreaking, and all of this culminates in a very effective delivery of the show’s main question: What makes us human? Can Shinichi really been considered human at this point? What’s left in his heart and mind that is human? And how can we really say that not living by primal instinct is what we truly meant to do?

All of these points are also made very well by the introduction of Mamoru Uda and Hideo Shimada, the two newest additions to the side cast. Mamoru Uda is a nice contrast to Shinichi’s post regeneration personality, as he is still very human despite have a parasyte controlling him from the mouth down. He cries, is extremely empathetic, and in general helps remind us of what Shinichi used to be, making our main character’s development all the more heartbreaking.

Hideo Shimada on the other hand is a good representation of what makes Shinichi more human than his enemy. Shimada isn’t a nice guy, he has no sympathy for others and lives entirely on instinct and rationality. He lives to survive and integrate with human society, while remaining a full time human eater. It’s because of this animalistic side to his character that he becomes unlikable, and he’s currently serving as a nice foil to the new Shinichi.

However Parasyte’s past few episodes haven’t been perfect. The other new character introduced recently is a young high school girl named Kana, an extremely perceptive bugger who can sense parasytes for some unknown reason. Because of this strange ability she has fallen in love with Shinichi, thinking that he must secretly be her soulmate… Sigh! I don’t really have a problem with Kana, but in general she really helps represent the main problem the show has right now: It’s romantic subplots just aren’t very compelling. Sure Murano’s anger at Shinichi is sad, and you do want to see them make amends, but compared to the stuff about human nature and survival of the fittest, her and Kana’s problems seem very petty in comparison. This isn’t necessarily a bad thing considering they’re mostly pushed off to the sidelines, but it’s a little annoyance I’ve noticed nonetheless.

Overall though, Kiseijuu is still a great show! There’s plenty of other topics I could of touched on, such as how more people are starting to discover parasytes, or the strange plot that seems to be going on behind the scenes of Shinich’s high school parasyte issues. This is just a testiment to just how densely packed this show is. Anyone who is interested enough could write an essay on the themes of this show, and this combined with the still stellar direction creates for a delightfully fun, and thought provoking experience. In general if you haven’t started watching Kiseijuu yet, please do! You definitely won’t regret it.