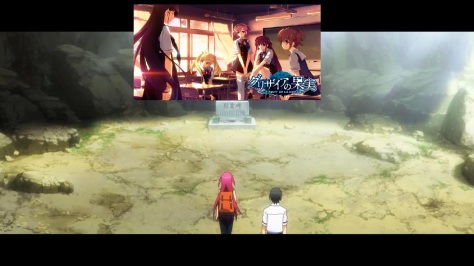 Here lies the potential of a good show

Has officially lost it’s credibility as both a serious mystery and over-the-top drama. This was not a good way to end things.

Aside from dedicating more episodes to these routes, there is absolutely no attempt at trying to fix what they’ve broken here. The visual presentation lacks any of the boldness it displayed in the past, plot points are displayed as if instructed by cue cards, humorous interactions amount to little more than flirting, dark elements are exploited for shock value, and any moment trying to be dramatic or tense is undermined by a repetitive formula full of juvenile cliches. Practically all the girl’s backstories involve a world where people were dicks to them aside from one or two people who eventually died, and Yuuji’s involvement in their affairs usually lack convincing connections to warrant his superhero routine. It’s hard to care about stories that seem interchangeable or characters that lack presence after their route is done, especially when it expects goofy material to be taken seriously.

For a brief moment though, it seemed like I could enjoy it as an example of ironic humor disguised as bad drama. I could simply laugh at how overblown the drama was or how sappy the emotional moments were if stupidity was present from the start, and that’s exactly what happened with Makina’s route. Wouldn’t you chuckle after seeing a little girl protected by a teenage assassin acting as her daddy being chased by her evil mother’s army of corrupt cops, all because her sister was caught in a car bomb and doesn’t want the daughter of the husband she cheated on and killed to succeed their power? To the route’s credit, it does give a compelling reason for Yuuji to stick with Makina and offers enough time with them together to build a connection. But the scenario is so ludicrous and void of real depth that it’s easy to poke fun at, and the same can be said for the shameless pandering towards a father-daughter relationship or the laughably chaotic conclusion to it all.

It’s when the show seems to actively dig into darker territory that the stumbles become offensive, and Amane’s route is a steaming pile of wasted potential. Essentially it focuses on Amane’s backstory as the sole survivor of a bus accident that trapped several of her classmates under a cliff for over 15 days, including Yuuji’s sister. Fans describe it as the best route in the VN, and I can definitely see some elements that could have worked. I love stories where a group of friends or enemies are stranded together, experiencing the desperate struggle to keep one’s humanity while facing death, starvation, disease, outer threats, and inner corruption. It spawned masterpieces such as Lord of the Flies, horror classics like Night of the Living Dead, a touching arc in Angel Beats and one of my favorite backstories in One Piece. In fact, this arc manages to give a convincing reason for why Amane is trying to love Yuuji(apology for abandoning Kazuki) and manages to dedicate time discussing about survivor’s guilt. So what exactly does this do wrong that keeps it from being a compelling story?

Well first of all, the entire sequence amounts to nothing more than one long narration with zero input by the listener or storyteller. Even when it’s supposed to be Amane’s heart-to-heart moment with Yuuji, their presence is completely absent while it’s told and the lack of interactions before and after the story makes for an empty conclusion. Secondly, there are several logical fallacies in their situation that has us question why they didn’t manage to escape from the start. They were desperate enough to eat eachother by the end, so why wouldn’t they try setting a forest on fire, following the trail of a river, or simply running across the forest until they found civilization? Oh wait, they sent a moron teacher with half their food who couldn’t find it even when Amane found it on a 3 HOUR WALK! That leaves me to a third reason; Amane and Kazuki are the only characters who are competent in this situation. The rest are too pathetic to think for themselves, so the only characters we need to care for are those two. And finally, the show itself don’t seem to take any of it’s dark moments or dramatic content seriously. It’s more excited about shocking audiences with handicapped girls pissing themselves, maggots growing out of untreated wounds, and pet dogs/dead friends being eaten rather than exploring these characters descent into madness or lingering in the thought of their eventual death. It’s more content with playing up the Yuri fanservice of Kazuki and Amane rather than showcasing an actual build-up to a friendship. And it’s certainly content at portraying victims of starvation and loneliness as literal monsters rather than broken remnants of human beings. I couldn’t help laughing at seeing the incompetent teacher transform into a caveman zombie.

And don’t get me even started about the poor excuse they have for an ending. Apparently the hostage situation is an anime original scenario, and it definitely feels like a tacked-on conflict written in half an hour that’s overly dependent on shock value and coincidences. Do they honestly expect me to believe that this school of potential psychopaths would allow a stranger would enter with a weapon so easily, then be scared for their safety because Amane is getting beaten up and shoved into a bathroom by a rapey old man when Yuuji has a sniper rifle several miles away? The situation seems so reliant on bad luck and incompetence you swear that it was planned by gremlins, and even then it feels padded because the solution is so damn obvious. It also doesn’t help that they simplified a heartbroken dad ready to kill into a rapey, sadistic stereotype so shallow that Sugou from ALO would seem normal. It’s a pointless story with very little build-up, absolutely no tension, and ends on conclusion so generic and happy that you’d think they came back from a tea party.

While it never left me bored through its 3 month run, it remains one of the biggest disappointments of the year. A show that left me so intrigued by its first episode to the point of deep analysis ends on a pathetic, predictable note. I want to give it credit for the enjoyable moments it had through most of its run, but the overall experience gets worse the more I think about it. Two sequels have already been announced, and I am not looking forward to either of them. Expect a mention in the Unblogged section at most, because the only memory about this show that hasn’t been stained is the ED theme. Maybe i’ll check out the visual novel when I have 80 hours to spend, because I have no interest in spending that time now.