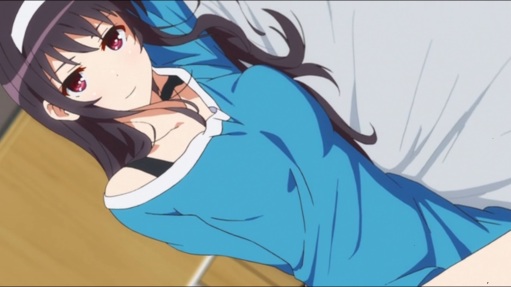 My opinion on Saekano has been extremely skitzophrenic. I’ve jumped from hating it, to liking it, to loving it, and now I’ve settled down into a feeling a dissatisfaction. Okay dissatisfaction is a strong word, because it implies there was something to be disatisfied by, and that simply isn’t the case with Saekano.

In retrospect the entire show has been consistent from day one, even with the occasional spurts of greatness throughout, and that is definitely true of these last few episodes. It still has the same generic harem anime plot and humor, the characters remain the same as they did at the beginning plus some extra backstory, and Megumi is still best girl. The ending however isn’t pretty inconclusive. Like Ao Haru Ride of seasons past, this finale provides no real ending to the story. However, these episodes do get some things done, especially when it comes to Eriri’s lackluster character arc.

Yep, you know that conflict that was boiling up between Tomoya and Eriri in the previous episodes? Well it finally comes to a head here, and ends in pretty much the exact way you’d expect it to. And by that I mean this arc is pretty much an exact repeat of Utaha’s arc, except this one is much less effective. Don’t get me wrong, the Romeo and Juliet scene is pretty cute, and the setting of fireworks party was a good place to set these character’s final confrontation; but once again, it’s Eriri who kind of makes this less interesting than it should be. Maybe it’s just because I’m not a very big fan of the tsundere archetype, especially when it’s played so textbook like, but I found it hard to care about her issues. Combine this with the fact that it feels like a copy a paste clone of a previous plot line, and you’ve got yourself a less than impressive set of episodes. I mean just like Utaha’s arc, this part of the show tells us how the heroine of the arc met Tomoya, what they did to wrong each other, and then there’s a make up scene where the heroine officially decides to join in the game circle.

This repetitiveness also follows through into Michiru’s arc. You know, the cousin who was briefly shown in Episode 0? Yeah I kind of forgot about her too… Anyways, this arc was a lot more interesting content wise than Eriri’s, though it also marks a low point for the series’ humor. Throughout this entire arc, the main joke seems to be: Ha ha, look at Michiru sexually assault and beat up Tomoya. This joke is neither funny, or particularly clever, and the fact they keep playing up the suggestive sex jokes really doesn’t’ do this arc any favors. Combine this with some meh animation in some of the episodes, and you’ve got yourself some pretty unfunny comedy. Oh look, Tomoya is getting shoved in Michiru’s boobs. Isn’t that hilarious!? Michiru is suggestively humping Tomoya. Why, isn’t that a knee slapper!? Yeah, I really hated the humor here. It’s extremely lazy, not to mention jarring in some cases.

Past that awkwardness though, this arc actually has a rather decent conclusion. The anime concert with Michiru was pretty great, and while it wasn’t consistently animated, the stuff they did showcase was nice. It also provided what was probably one of the only funny moments in these four episodes. The twist that Michiru had been singing anime songs all along, while not drop dead hilarious, did make me giggle a few times, even if it was a contrived way to make her join Tomoya’s circle. And the show ending with them completing their first route was about as decent a conclusion as we were going to get. The show had been clearly heading toward season two bait for a while, so it ending on a major landmark in their visual novel’s development cycle was a nice to end things off.

I would also be remiss to not mention a few of the little moments I liked throughout this arc. For one thing the conversations between Tomoya and Megumi are still precious little things. They have some of the best chemistry in the show, and the scene where Megumi shows Tomoya the coding she’s been doing for the game is so adorable. Despite her lack of personality in some places, she still cares about Tomoya and the project! If the entire series was composed entirely of these scenes, I probably would have liked it a whole lot more than I do currently.

Also I did actually enjoy the way Eriri’s conflict with Tomoya ended, even though the rest of her arc was uninteresting. Their final confrontation flipped back and forth between both sides, first blaming Tomoya for their issues, and then twisting it around to Eriri. I was worried the whole time that the show was just going to place the blame their problems on a single character, but then at the end they both realize that it was both their fault that their relationship was on the rocks. It wasn’t just Eriri ignoring Tomoya in when they were children, or Tomoya promoting another person’s doujin over hers, they both were a part of the problem. This ending felt very fair, and also ended up much less sexist than I fought it would be considering how much the show likes to pummel Eriri. 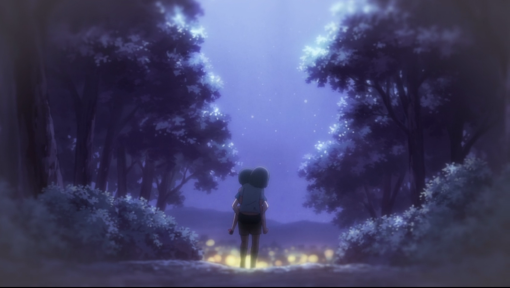 In the end though, I don’t actually regret watching Saekano. Yes, some parts of the show really annoyed me and the ending was pretty inconclusive; but if you asked me if I would watch a second season, I’d probably say yes. Saekano was an interesting watch throughout its runtime, even if some parts of the plot and writing were exceptionally lazy. The character chemistry was enjoyable, the animation was consistent and refined throughout, and Megumi was definitely the best girl of Winter 2015! It may not have been as good or as ambitious as I wanted it to be, but overall I’d recommend Saekano to those looking for a somewhat decently constructed harem. Goodbye Saekano, it was fun while it lasted.

P.S. Sorry for the lateness on this post! My computer died, and I lost all my screenshots.