Can someone explain to me why the finales in this winter season have been destroying me emotionally? I mean first there was Death Parade, then Maria the Virgin Witch, then Shigatsu wa Kimi no Uso, and now Tokyo Ghoul, a show which I didn’t feel that strongly towards, has also crushed me. Thank god I only just started watching Shirobako or I might have turned into a ball of mush… So yeah, in case you couldn’t tell already, Tokyo Ghoul season two killed it on the finale, and no, that was not meant to be taken as a literal joke in any way. In general though this second season has been amazing, improving some elements, while sadly maintaining some of the first season’s writing flaws.

Let’s talk about those writing flaws first though, just to get the bile out of the way. Now, while I have always liked Tokyo Ghoul, if there is one thing I don’t think I’ll ever call it, it’s definitely original. The premise is pretty textbook mutant discrimination, you know, the X-Men, Psychic Children stuff you see a lot in pulp stories. Tokyo Ghoul is really exactly like these stories, and it makes no qualms about trying to be different. Yeah I guess the show is unique in that the mutants in this case have to eat other humans to survive; but the main message at the end is, “We shouldn’t fight! We should coexist,” which is pretty common in this type of narrative. It’s not like that’s a bad, but it’s definitely not a factor in it’s favor either.

Another annoying aspect about the writing in this show has got to be the ridiculous amount of cast members. Seriously, by the end of the story I swear there are about 20-25 recurring cast members who are named. However, like most shows that try to squeeze too into too little time, by the end of the show half the cast felt useless. From the strange inclusion of Arima Kishou right near the end of the story, to Yomo and some of the other barely explored Anteiku members. There are just too many tertiary characters for a show that is only 24 episodes! Everyone feels pointlessly jammed in, and so I struggled to really care for anyone except Kaneki, Touka, Hinami, Hide, Akira, Amon, and if I really stretch myself Nishiki, though he just kind of gets forced out of the plot by the end of it all.

No one in my opinion more perfectly showcases this than Shuu, a character who was an entertaining side character in the first season, but doesn’t have much relevance here. They try to force him into scenes in this second season where he really shouldn’t be. Watching him having playful conversations with Hinami, or his rude interruption of the tension in episode 9 (Especially his badly animated tears), simply isn’t needed; and his camp, slightly homophobic character archetype is really jarring when compared to the tone of the show, this season in particular. His brand of over the top Mamoru Miyano over the topness just feels awkward, and it’s good that they write him out of the show in episode 9!

That being said, even with the bloated cast, Shuu is pretty much the most useless character in the show. At least everyone else ranges from okay to somewhat interesting. Yeah, a lot of them weren’t needed, but they felt useful enough overall to make them tolerable. I still really wished they would have cut at least a few of them out (Did we really need Uta?), but they handled their side characters about as well as they probably could have. After all we still got cool characters like Juzo, the murderous Dove agent that was raised by Ghouls. Characters like him are not only decently fleshed out, but make the story feel more human and interesting in terms of conflict.

Speaking of conflict, wow the fight scenes in these episodes are good! While episode 4’s fights were cheap and boring, the ones in the final and mid episodes are just gorgeous. Great direction, choreography, and tension, making me once again realize just how great of a director Shuhei Morita is. The only complaint I have about the fights in these episodes is probably the dialogue, which can sometimes turn into complete shonen cheese. Just take a look at these gems: 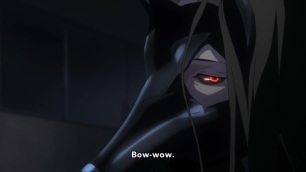 I mean, just wow… Not only does that dialogue kind of destroy the ominous music and tension in this scene, but it also just kind of seems to go against the nature of Tokyo Ghoul, which is to make every side of the conflict seem human and empathetic. How can I relate to people who say weird things like this? Joking aside this is really the only blemish on some otherwise stellar action scenes, and the final fights tend to lack dialogue altogether, so it all works out in the end.

Despite the fight scenes being great in their own right though, Tokyo Ghoul is really at it’s best during its quiet moments. Those brief moments of respite after a tough battle with Amon and Akira drinking in a bar, a trip to the zoo with Juzo and Shinohara, Touka and Kaneki staring at each other across a bridge in silence, the fear of death in battle as a Dove Agent cries over a scratched out will; all of these moments flesh out the cast of Tokyo Ghoul more than any of the slick shonen-esque fights ever do. Seeing the backstories of the cast is always an amazing sight. Juzo is more than a psychopathic killer, just like Yoshimura is more than a sweet old ghoul. While some of these backstories can be admittedly ham handed (Especially Yoshimura’s, which takes way too long to get to the point), each one really helps accentuate the message of the story. Everyone in this war is human, and they all have their own reasons for fighting.

All of this is best showcased in episode 9 when Touka runs off to fight in the battle for Anteiku. She was told to stay in her new apartment and protect Hinami, but she doesn’t want to. After forming all these bonds with Yoshimura, Roma, and the others, she doesn’t want to leave them behind. Yoma tells her to stay put, saying that the reason they’re willing to die is because they sinned in the past, to which Touka responds, “What about me!? Haven’t I sinned too!?” Touka may be emotionally reckless and confused in her feelings for Kaneki, but her drive to protect others, to help her side, while sympathizing with others is admirable. That scene between her and Yomo is perfect in expressing everything Tokyo Ghoul has to say, and so does Kaneki’s tragic character arc… But before we get to that, I just need to gush about the final three episodes.

Honestly it’s hard to really find many faults in the finale. Like the first season’s closer, these final three episodes are almost godlike in quality, wrapping up everything that is necessary, while leaving hope for an unlikely future. Every element that is good about Tokyo Ghoul comes together into one beautiful package. The fight scenes are fast and tense, the quiet time is haunting and beautiful, the important characters get their arcs concluded, and the animation is at its best. There are hundreds of moments throughout this finale which deserve mentioning, so I’ll try to condense it as best I can: Juzo standing up against the One-Eyed Owl, Amon and Kaneki’s revealing fight, Takatsuki’s surprise twist, Yoshimura’s haunting death, the entire final episode. I don’t think I’ve seen a finale this good since I watched– gosh, I can’t really remember. Cowboy Bebop, maybe?

Really the main reason these final episodes succeed is because of how perfectly it wraps up Kaneki’s arc, and by extension the message of the show. Yes, there are still loose threads by the end, but in general the ending still works because it feels like an ending. Kaneki throughout this whole series has been going for a massive character struggle. You see, it turns out that Kaneki left Anteiku not because he wanted to join Aogiri Tree, but because he wanted to get stronger in order to protect his loved ones. This lead him to become a Kuja, a ghoul cannibal that can hold massive amounts of power by eating his own kind. Of course this leads to massive consequences in terms of Kaneki’s mental state, as occasionally the power he’s stored up becomes too much for him to handle. By the end of the story though, he’s ready to take a stand against the CCG to protect Anteiku, using only his natural abilities to help them, and he realizes his mistake. Abandoning the people he loved has only lead to more harm for them.

This is perfectly encapsulated by the final moments in episode 12, where Kanenki carries his dead friend Hide to the CCG leaders. Here not only do we see that Kaneki has finally realized his mistakes, but we also see that he is once again attempting to close the divide between humans and ghouls. As Yoshimura said, Kaneki is the bridge between the two species. He’s willing to sacrifice himself for both sides, and show that he is not just a monster. After this Kaneki’s fate becomes unclear, but either way it was an appropriate end for his character arc. It showed how much he changed, and how he realized what he truly needed was not to run away from his loved ones, but to stay with them.

Overall though, Tokyo Ghoul √A was a great show, even though it was plagued with massive problems. The writing was cramped and messy, but the well executed emotional scenes were truly a sight to behold. However the best part was definitely the final three episodes, which perfectly encapsulates everything good about the series, while ending it on a satisfying conclusion. Tokyo Ghoul may go down in history as messy show filled with overwrought tragedy, but I personally haven’t experienced a finale of this magnitude in a long time. With its stellar direction, interesting characters, and some of the best episodes I’ve ever seen, Tokyo Ghoul may not be perfect, but I highly recommend it to those who haven’t seen it.

One thought on “Tokyo Ghoul √A – Episodes 5-12 Final Impressions”