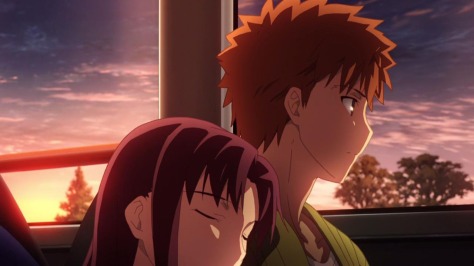 Kept you all waiting, haven’t I

Seems like even a seasonal break wasn’t enough for ufotable to get back their energy, because this season screams of a tired staff. But one question remains unanswered: is it still good? Let’s find out.

I’ve said this before and I’ll say it again: Fate Stay Night was never the greatest story in its original format. While it definitely had strong themes about heroism and a fascinating setting, it’s status as an eroge meant that character interactions with the heroines were the biggest priority in mind. The dark action drama was simply used as a mean for raising stakes, and it still had to deal with the limitations of what a VN could tell (unexplored territory per route, route-exclusive character development, heavy reliance on narration, etc). These flaws were even more apparent once Fate Zero came out, proving it was possible to connect these divisive elements into one epic story.

Now this doesn’t mean I wanted a combination of 3 differing stories, nor was I expecting an orignal route. What I wanted was an improved version of the UBW route; something that didn’t require two different stories to fill in the blanks. But I guess the minor changes in Season 1 seemed bolder in my head, because by this point they played it safe. Practically nothing has changed plot-wise in comparison to the movie, exposing a 2nd half full of forced resolutions (free pass, handicap, or Archer sends swords), silly twists (Archer’s Identity), anti-climactic confrontations (most servant battles), and sloppy use of characters (everyone apart from Rin and Shirou). Not to mention they’ve cut almost all ties to Fate Zero apart from addressing Shirou’s ideals. Kirei still gets reduced to a 2nd rate villain, Saber’s inner conflict almost seems to solve itself, Gilgamesh becomes less intimidating the further the story goes, and despite this technically being Rin’s route, her family’s legacy gets pushed aside for love worries and her connection to Sakura remains locked away in another route.

Still the UBW route was loved by fans for good reason: it had the most action out of all 3 routes, had arguably the best romance, provided important backstory for several servants, and found a good balance between the romanticism of “Fate” and the realism of “Heaven’s Feel”. So if it’s faithful to the source regardless of its flaws, surely it’ll deliver when it comes to the highlights right?… Actually it’s kind of lacking on that department as well. Reflecting the tiresome nature of this season, it becomes more of a checklist for key events in the VN rather than an ongoing story. Little time is ever given to character interaction, emotional moments are often skimmed through, and most of the inner monologue that emphasized the stakes is cut out entirely. Meanwhile plot details are dumped like a truckload to keep coherency consistent, and fights are constructed in ways that assure the outcome too soon. The result is inconsistent pacing that’s too rushed to build emotional investment, yet so concerned with details that it brings great moments to a halt. Why should Rin and Shirou’s stargazing scene amount to less than a paragraph when Archer gets an entire thesis for his agenda against Shirou?

It’s thanks to these reasons that chunks of this season left me bored or irritated. For fans that felt the same, I could imagine them hating this adaptation. But here’s something that’ll probably shock you: I still think it’s a good show. While there’s definitely a lack of passion or creativity compared to its start, there’s several moments scattered throughout where they absolutely nailed it. Lancer has such charm as the asshole with a heart that his death becomes the most memorable of all the servants. Caster gets some additional backstory that humanizes her while showcasing the extent of her powers. Illya’s fate as a blood sacrifice was surprisingly heart-wrenching once it explored the damage Kiritsugu’s absence did to her childhood and how close her bond with Berserker was. Even Gilgamesh makes up for his shallow motives by being over-the-top evil. You want to see him die after all the suffering he gleefully caused, and it delivered with one of the best fight scenes in the entire show.

Still the main meat of the UBW route was always Archer’s vendetta and Rin’s romance; two aspects I already listed numerous complaints about. But does it work when it matters the most? Yes! Archer’s role as an antagonist may have felt forced and his lectures definitely ran too long, but his regret stems from a key part of Shirou’s character: blind faith in Kiritsugu’s dream. Both Archer and Kiritsugu were trapped trying to reach a dream they didn’t know how to achieve, eventually relying on power requiring countless lives as payment. Even Shirou has failed to save several lives throughout the grail war, strengthening the argument that not all lives should be saved. But like we’ve seen before, what makes Shirou different is that he continues believing in these ideals because it still represents what a hero SHOULD be. When Shirou proclaims that he’ll never regret holding onto these goals, you know that he’s prepared to face these consequences head on. It hammers home the message that flawed ideals are still worth upholding, and it’s powerful enough to influence both Archer and Saber.

And speaking of powerful influence, I found the romance between him and Rin to still be endearing. I definitely miss the banter from season one and their serious moments here were cut short, but this season really sold me on why these two need each other. While both hold enough trust to leave the fate of the world on one’s shoulders, the grail war has revealed not only the lengths they’re willing to go for each other’s safety, but how much they depend on each other’s support to stay who they are. Rin can only go so far as an ambitious magus without someone watching her back, and Shirou is bound to be another Archer without someone to guide his overwhelming conviction. So the fact that they could satisfy these roles with confidence shows that they complete each other. However don’t take this to mean that they see each other as tools, because these attractive propositions stem from a simpler need: they treasured each other’s soft side. Shirou may have admired Rin for her decisiveness and confidence, but what convinced him to stay was a tender heart willing to accept his stubborn self. And despite complaining about Shirou’s stubborn nature, his loyalty and conviction gave her new motivation to live and love. And if there was any doubt that this relationship would work, the epilogue points out that they’re prepared for what’s to come. They’ll be each other’s light of hope, voice of reason, heart of acceptance and above all, closest companion. How could you not find that sweet?

Bottom-line, this is a decent adaptation of the UBW storyline with a couple great highlights. It’s lacking as both a follow-up to Fate Zero and a representation of the VN, but i’m just glad that the public has an alternative choice for experiencing Fate Stay Night through the DEEN adaptations. Just like the theme of this route, i’d say we should uphold this flawed show. And hey, the last episode is pretty much a love letter to Type Moon fans, so eat your heart out! WAVER GOT BUFF!