Akagami no Shirayuki-hime is perfection… Okay, maybe not literally, but in my heart it’s king! Ever since Akatsuki no Yona ended in March, I’ve had a strong desire for a second season, and luckily for me Akagami definitely fulfills my need for a shoujo fantasy-adventure with a strong female protagonist (A very specific subgenre indeed). However, that doesn’t mean this show is just a clone of Yona. In fact, Akagami brings it’s only unique flavor to the genre, providing an experience that’s equal part classic Disney princess and smart, sentimental character drama.

Before we dive into the meat of this show though, a brief plot summary. Our story begins with Shirayuki, a young woman with bright red hair living in the kingdom of Tanbarun. She lives a rather peaceful life as a herbalist, but one day a royal guard of Prince Raj seeks her out, telling her she must come to the castle and become the Prince’s new concubine. Shirayuki, wanting to continue her simple life as a medicine woman, decides to flee the kingdom, and on her way out she bumps heads with a man named Zen. Initially she’s skeptical of him, but before she knows it he’s helped her escape to the kingdom of Clarines, where he resides as the second prince.

Now that plot summary may seem somewhat generic by shoujo fantasy standards, and in many ways you’d be right. A major part of Akagami is it’s fervent nods and references to classic fairy tales and tropes. However, what sets Akagami a part from its counterparts is how it plays with these tropes and injects them with modern day relationship politics. For example, instead of Shirayuki eating the poison apple, Zen eats it by accident. But instead of being saved by the kiss of a princess, he survives due to his immunity to poison. In fact, despite the many awful situations Shirayuki and Zen get into, they are often smart enough to solve their problems head on; which can’t really be said for the most classic princess archetypes.

This is especially true of Shirayuki who, unlike a lot of shoujo protagonists, is constantly standing up for herself and her relationship with Zen. She wants to understand him, comfort him, and be by be his side. Never once does she just sit back and wait for her prince to come rescue or help her, she uses her skills as a herbalist and a healer to her advantage, creating gas to escape from her enemies, and becoming a court herbalist to be closer to Zen. Her headstrong attitude makes her incredibly likable, and she’s constantly pushing her and Zen’s friendship forward in new, more romantic directions.

Zen is also a great character, who bucks the trend of many shoujo love interests by constantly supporting Shirayuki throughout the story. Sure, occasionally he can get overly protective and stubborn, but he’s always there to listen to and comfort Shirayuki. Together they create one of the most well rounded and realistic couples I’ve seen in anime, and that’s saying a lot considering Spice and Wolf exists. Of course it also helps that the side characters are also pretty nice. From the quiet solitude and development of court herbalist Ryu, to Zen’s many personal aides, everyone is interesting in their own way; even if they aren’t as well developed as the main couple.

However, while the writing here is very effective, the one thing that truly sets this thing apart from every other show airing this season is the stunning animation and direction courtesy of Studio BONES and anime veteran Masahiro Ando (Sword of the Stranger, Hanasaku Iroha). Once again proving that they have some of the best artists in the industry, BONES’ production is lush and filled with great character animation and backgrounds. A few people have compared the overall style of Akagami to a Makoto Shinkai movie, which I can definitely see in some places. The lighting here really saturates a lot of the colors on screen, creating a dreamlike and relaxing feeling to the otherwise pretty generic medieval fantasy setting. Combine this with Ando’s confident direction, and you’ve got a show that emanates personality and atmosphere from every shot. It also features a lovely orchestral soundtrack composed by Michiru Oshima, so that’s another point in its favor.

That being said, I can definitely understand why some people might find Akagami no Shirayuki-hime boring. You see, despite my endless amount of praise for this series, I have to admit that this show is basically pleasant and not much else. Sure it’s a smart, well made kind of pleasant, and not every show has to be a riveting work of fiction, but the slow pacing and calm tone of every episode may not be for everyone. The show is promising to go in more intense dramatic directions with the introduction of Zen’s brother Izana, but as of now it’s mostly a small quaint experience without a lot of strong tension. I may love it, but it’s definitely not for those who like more spectacle driven affairs. 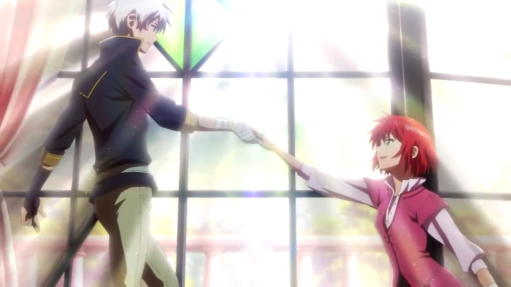 Overall though, I highly recommend Akagami no Shirayuki-hime to anyone who loves good shoujo, romance, or is just looking for a sweet and relaxing experience. After a stressful week, sitting back and watch Shirayuki and Zen slowly grow closer and closer together is very enjoyable; especially when combined with the previously mentioned gorgeous art design and animation. It’s stolen my heart, and while it suffers from maybe being a little too sweet for the senses, it is consistently excellent, and has yet to so any signs of dropping in quality. It’s mature, beautiful, and probably my favorite show of the Summer 2015 season.