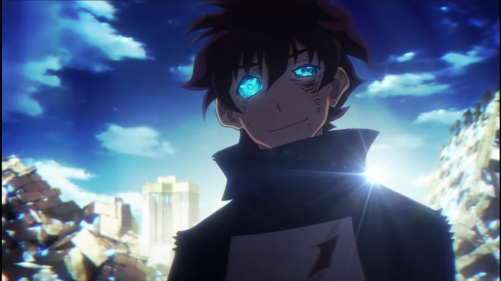 It’s finally time. Yep, after three months of waiting for it, the finale of Kekkai Sensen aired on TV, allowing me to finally talk about this series’ final two episodes. Really, I would complain about the delay, but honestly these final two episodes are so amazing that I find it hard to care. The show may have left me bated on a cliffhanger for months, but when I see something this, well, perfect, I can’t help but forgive it for all its transgressions. I mean I loved these final episodes so much I watched them both twice, and the final episode is 46 minutes!… Okay 46 minutes of beauty, but that still means I spent an hour and half of my life just watching this one episode. And to be honest, I would do it all over again.

However, this post isn’t just covering the finale, so let’s talk about Episode 11 first; which is admittedly as great as the finale itself. You see, after all the vaguery and hidden plot points in previous episodes, every little detail about Black and White’s story comes into focus. Originally named William and Mary Macbeth, Black and White lived a relatively peaceful life with their caster parents. White was born with no psychic powers, despite being a purebred descendant, and Black was born with double the normal amount, implying that he stole it from White during birth. They grow up on unequal footing, and as seen multiple times throughout the episode White feels like a burden to everyone, while Black feels like a burden to White because he’s not strong enough to protect her.

Their false conceptions become clear though when, not only does White realize her parents and Black love her with all their hearts, but that Black is brave and courageous enough to stick up for the ones he loves. In fact, his courage and White’s nurturing come to head when the Great Collapse occurs. Their parent’s dead, Black and White accidently stumble upon a bright blue light, who I’ll just call the King of Despair, and in parallel to Michella and Leo’s story, Black let’s it posses him. Of course this terrifies White, and in a ploy to help get her brother back she agrees to help the King of Despair reenact the Great Collapse, betraying Leo in the process. Little does she know that she’s been set up from the very beginning, because if the collapse happens the barrier around her heart will disappear, letting a bullet shot into her by the King of Despair pierce her heart.

WHOA! That is a lot to take in. Now, as you can probably tell by now, this episode is dense as f**k! From beginning to end, it reveals all the information about Black and White, and my favorite part about it is how it delivers said info. While it could have just had White dump a block of text on the audience, the episode takes it’s time, showing scenes with great visual metaphor and dialogue that feels naturalistic and character driven. Yes, things do get messy near the end, I mean I really had to piece together the stuff about White’s heart situation, but for the most part it works even with the occasional moments of vagueness.

And the reason it does is because it’s all grounded in the show’s themes and emotions. At it’s core, Kekkai Sensen is about the beauty and restrictions of family bonds, and that message is communicated very well here. So what if I don’t know exactly why White is slumped over and dying? So what if I don’t know what Leo has to do with the Great Collapse? All that matters here is the pure raw emotion of the situation. White is betraying a good friend, and all for a cause that was faulty to begin with. Her willingness to protect Black is her biggest strength, but also her downfall. This episode asks us to take a look at their actions and say whether or not they’re justified. Is it really worth it to give up everything for someone else? Or should we find common ground and work together to overcome each other’s problems? I still wouldn’t call Kekkai Sensen one of the most complex works of anime I’ve seen, but this episode is truly breathtaking and challenging in a way I would have never expected when watching this show’s first episode. Its beauty is in its stunning direction and multi-layered narrative, making the whole episode one of the best in the show.

Strangely enough though, the reason the finale works so well is because it cuts straight through all that thoughtfulness and instead becomes a satisfying action romp. When I heard the finale was going to be double the length, I was kind of skeptical. For the longest time the series was way ahead of the usual production schedule, with episode 8 being in production right before the series started airing, so the addition of 23 minutes to the finale seemed like a pointless cash grab considering how well the show has been selling in Japan. I was afraid that this was a sign that Rie Matsumoto’s vision of the series finale was compromised due to studio demands for a half baked open ending; but boy was I wrong!

In retrospect, I can’t really imagine this episode without the extra twenty three. I can plot out a normal length finale (I’ve actually thought about it , and I can definitely see a way to cut out certain scenes to get the episode shorter and more precise), but the fact that this episode has room to breath and indulge in itself is a saving grace. Yes, I just said that the indulgence here was a good thing. After all the plot points are set up in the first few minutes, this episode is just frenetic action and intense catharsis. Watching every character show up for one final battle is an absolute blast, and yet their presence never feels like padding. Basically, this episode is like one big rollercoaster ride with all of your best friends.

Of course saying that this finale is all flash and no substance would be lying, because, like episode 11, the emotion of everyone on display here is very effective at delivering the show’s overall message. Seeing Leo’s final scene with White, watching Klaus fight for his life in a bloody battle, and finally showing Black’s redemption are all great scenes that really hit me in the gut. I felt like everyone had reached a satisfying character arc by the end, and while there was obviously still room at the end for a potential continuation, I didn’t really want it. What else could this show say? This finale did everything it needed to do, and the complete package is dazzling enough to keep me in love with this series for years to come. 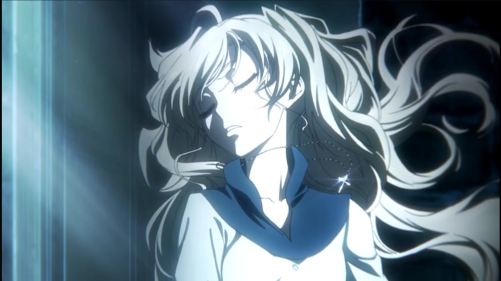 I would spoil more, but honestly Kekkai Sensen is something you should experience, and I’ve already said enough about previous episodes as it is. Rie Matsumoto has delivered yet another tour de force that is on par with her debut Kyousougiga. While it may not necessarily be extremely complex in the traditional sense, the show’s jaw dropping visual execution in combination with the show’s tight scripting really create a unique and affecting journey. Will you like it? I can’t say for sure. Many people have come out this show feeling kind of jipped due to its quick pacing and strange episodic one offs. Still, it’s something I recommend you at least try out, since works with an artistic vision of this magnitude rarely see the light of day. Thank you for everything Kekkai Sensen!