To be honest, my plan was to make this longer.  but due to time restraints (and my personal laziness included), I decided to just wrap this up.

I love this show I really do and no amount of my words will let me express that.  So here are my quick previews on the rest of the show. 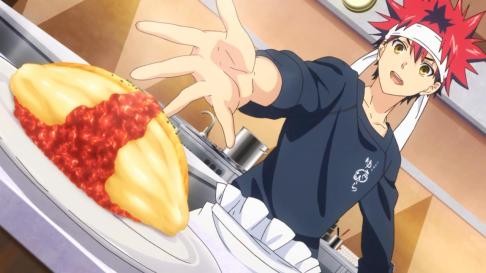 The training camp was an example of how the show would surpass its awesome factor by a million my using the famous trope of “blank” camp.  The food looked delicious as ever, the reactions are superb and hey at least the overly suggestive reactions go towards the much older generations.  This is the place where Soma has to adapt to his environment and was a place where he show cased his calm attitude in the time of crisis.   Another time to talk about is the battle with the alumni Shinomiya.  We have Erina as the serious uptight traditional douche but the show decided we need a male version.  which I have no problem with.  Adding the contrast just makes Soma look more awesome and let’s me see the determination of Soma.  Also, appreciate the Shoukugeki between Soma and Shinomiya.  This is where the shipping should sail. 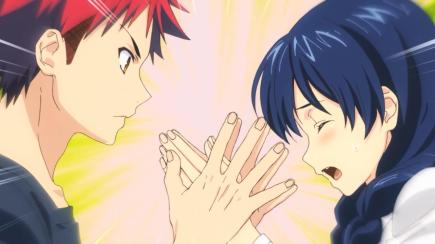 After the camp, comes the kind of breather episode since Souma comes back to his home town to dust up his family restaurant.  The conflict is that there is a new food place that is putting pressure on the traditional food block so Souma has to create a new method to attract the customers back to the traditional area.  nothing too much to say other than the villain was weird but I didn’t care too much about her.  It was pretty underwhelming(it was more or less a breather) and it was satisfying to see Souma’s victorious smile.  His smile may never get old.

Let me give a quick summary of the father returning.  Just another taste in the difference between Souma and his father.  Son and Father Bond.

The rest of the show involves the autumn festival.   When I read this arc, I just could figure out it was going to be something bigger.  I mean so far it has shown that it just gets bigger and bigger in challenge.  Aaaand the arc is cut.  Awesome.  Okay at least in this arc, there are more character development and making the members of the Polar Star dorm more relevant than they were.  Still doesn’t mean they really mean much but at least they are getting more screen time.  Also this is where Megumi change are the most noticeable where she went from a shy shrinking violet to a determined opportunist just like Souma. 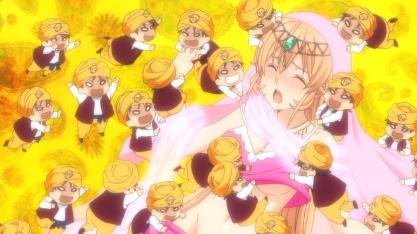 All in all, the show didn’t butcher the show.  The imageries are enhanced by moving pictures.  By the time I put this out, and you haven’t seen it, then go watch it ooorrr read it.  It is worth your time.  If you already watched it.  Just wait patiently for season 2 with me.  Good day to you people.