This time we get a more detailed look into Raishin’s past and how he got to know Yaya. After the fire that killed off most of his family and dolls, he was found by renowned automaton-designer Shouko. She’s responsible for creating Yaya as part of 3 masterpieces, and she’s also responsible for facilitating Raishin’s mission to achieve vengeance against his brother Tenzen, who is revealed to be the masked Magnus. It’s hard to tell how Yaya got so emotional towards Raishin, but it’s definitely genuine if she imitates the behavior of an abandoned housewife after his date with Charlotte.

Considering how simplistic the first 2 ep were, I’m genuinely surprised at how complex it’s gotten. Other than Shouko returning to release the restrictions of Yaya’s power, the mystery involving Cannibal Candy is much more than a single student behind the scenes. Lisette is initially the suspect, but it turns out she’s a Ban Doll created from the real Lisette’s corpse. And to be honest, the final reveal of who is behind Cannibal Candy caught me and poor Charlotte by surprise. And despite his claims for attacking the dolls being to gain power, chances are that he’s not the only one responsible.

Speaking of Charlotte though, I did feel somewhat sorry for her during this ep. I admit she was kind of dull before, but she’s proven to be proactive when situations call for it and her tsundere behavior got relatively toned down. I was rooting for her when she tries to capture Cannibal Candy on her own, especially when she’s framed of being Cannibal Candy thanks to several magical circuits in her room. And all I can say is that Raishin needs to make him pay for making Charlotte cry. Good thing Yaya has her restraints released and Raishin somehow survived Lisette’s attacks. 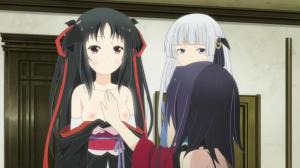 Overall, I’m very happy that an ep like this arrived when it did. It hasn’t made me an utter fan of this show yet, but it has flipped my expectations. To top off what’s mentioned above, the soundtrack was really good in this ep and Yaya is topless with UNCENSORED NIPPLES! I’m excited to continue this series, and all regrets of making this weekly are gone. Let’s hope it stays that way.